In Sweden, two different case studies will be undertaken. The first case study will reveal the tensions and complements of NBS alongside conventional systems for water management in a newly urbanized area - Årstafältet, a suburb in southern Stockholm. Årstafältet is a large open field located in a valley, which is wet and muddy with soil conditions that make development of this area costly and risky. Nature-based facilities were constructed between 2005 and 2008 for transforming Årstafältet into a landscape park. These consist mainly of a stormwater pond, a small stream “Valla”, a distribution ditch, surface screens, vegetated soil beds and water steps. The objectives have been to reduce the water load and the risk of overflows, clean the water, and restore the dry stream “Valla”, in addition to biodiversity, cultural and pedagogic values. Because of growing housing demand, however, the original plan was altered with a plan to build urban settlements in 2006. The new plans integrate highly ambitious NBS in terms of scale and environmental, ecological, social & urban quality requirements and values. The plans comprise enlargement of the water pond and redesign of the stream into 3 water ponds merged into one watercourse. Trees planting along streets, rain-gardens and locally water-treated facilities alongside housing blocks are also planned as NBS to improve water quality and manage overflow and floods.

The other case study concerns NBS for greywater treatment in the holiday home areas of Stockholm Archipelago. Here Norrtälje municipality has among the highest figures, with 129 holiday home areas and 13 900 holiday homes. Apart from leisure, many of these homes are converted into permanent housing. A large number of these lie on the outskirts of Norrtälje town or the urban core area and are excluded from the municipal wastewater network. The greywater treatment system used in these holiday homes/areas is not always efficient and operational, thus discharging contaminated wastewater. In turn, this leads to an increased risk of contagion, eutrophication and oxygen deficiency in the waterways, groundwater, lakes and coastal waters. This study aims to make a sustainability assessment of NBS as an option for greywater treatment in the holiday home areas of Norrtälje municipality within the Stockholm Archipelago, exploring the social, economic and environmental dimensions. 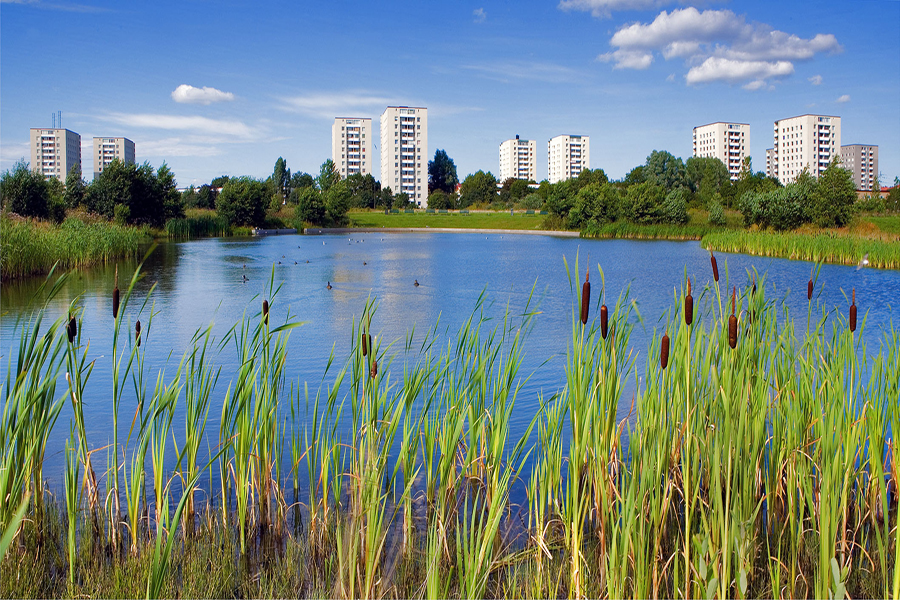 The stormwater pond in Årstafältet

An independent summer cottage in the Stockholm Archipelago